Cartographers should pay special attention to match a design between the different symbols as the smallest details can change how the geographical data is interpreted. The individual feature groups demand a different combination of Bertin’s visual variables (see below). J. Bertin proposed these variables in 1983 to differentiate the symbols by values and characteristics they represent. Often other variables such as spacing, focus, and arrangement are mentioned. As for shading and transparency are often used to develop a feeling of a third dimension, as shadows enhance immersion creating a contrast between object and background and inviting the user to click on it. Transparency on the other hand often occurs when objects are “faded out” to cease distraction and let the user focus on other information.

When considering styling an object with these variables, the purpose should be considered. Depending on that, some variables are more suited than others. Characteristic supporting certein purposes are:

A group of symbols is perceived as such based on a change in the variable, i.e. a category can be given to the group. 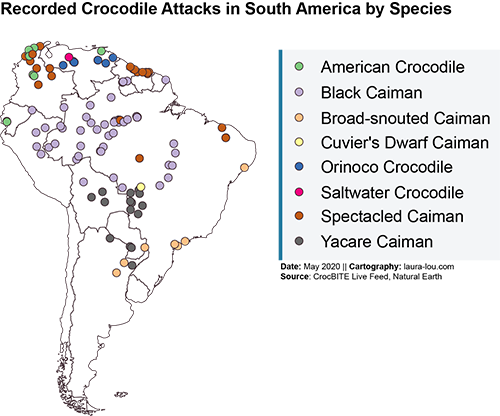 The example above highlights the categories (species names of crocodiles) by color. The corresponding species can be singled our as a group.

A variable is associative if the user is able to group symbols despite changes in other variables, e.g. different shaped symbols in a certain color can be either grouped by shape or color. 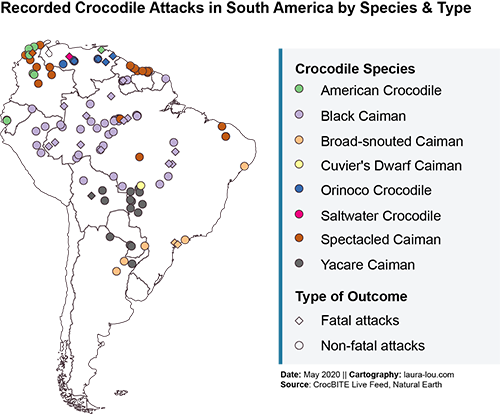 Again using the example of crocodile attacks a second variable is changed (shape). The various species are still grouped by color and can now categorized by the type of outcome as well.

Order: If objects can be easily recognized as sequence, meaning the symbols can be ordered by their difference, it is an ordered variable.

Quantitative: A visual variable is considered quantitative if a numerical difference can be derived.

The crocodile attacks are now categorized by specimen size. A ranking can be obtained (from small to large) as well as a numerical value. Therefore this visualization is

The amount of values is defined by length, i.e. how many distinctions are perceptible.

Shape is the change of the external form.
selective, associative, length

Size refers to the difference in dimension of a symbol.
selective, associative, order, (quantitative), length

Orientation describes the alignment of features to one another.
selective, associative, length

(Color) Saturation is the amount of grey in a color and refers to the intensity pf a color. Saturated colors draw more attention an less saturated ones.
order, quantitative, length

Location / Position describes the position of a symbol on the map inseid a coordinate reference, i.e. the position on the map symbol in relation to the projected spatial location.
selective, associative, order, quantitative, length

Arrangement characterizes the layout of map symbols, either applied in an grid-like, regular arrangement or in more irregular way.
(order), (quantitative), length

Crispness / Fuzziness refers to the sharpness of the edge or boundary of a map symbol. Map symbols with a sharp edge draw more attention of the user then map symbols with fuzzy outlines. It can be used to symbolize uncertainty in data.

Resolution / Focus is the spatial precision of a map symbol meaning the degree of generalization. It refers to the details of the linework in vector maps. A high level of detail gains more importance as the focus of the user is shifted towards highly detailed features. In raster maps the coarseness and grid-size define resolution.
order, (quantitative), (length)

Transparency describes the bkending of layers with the objects depicted underneath.
order, quantitative, (length)